National Education Policy 2020: As many times we have compared our Indian education system with many developed and developing countries like Germany, Singapore, etc. We have pointed out many demerits of the Indian system and thought about what we can learn from these developed countries. Now it’s been a happy moment when our government has introduced National Education Policy 2020 overcoming all the major criticism points in their new policy and has brought a revolutionary change in the Indian education system.

India’s education system gets an overhaul after 34 years. This is the third NEP after policies that came in 1968 and 1986. Though the government amended the 1986 policy in 1992, it was largely the same. One of the interesting points to note is based on the report and recommendations of the Kothari Commission (1964-1966). The government of Prime Minister Indira Gandhi announced the first National Policy on Education in 1968, which called for a “radical restructuring” and proposed equal educational opportunities in order to achieve national integration and greater cultural and economic development.

In 1964, the Kothari Commission had recommended a 6% allocation of 6% of GDP. But India never spent 6% of GDP on education since Independence. However, this is now about to change according to the Draft of National Education policy, which will allow the government to spend 6% of the GDP.

The National Education Policy was framed in 1986 and modified in 1992. More than three decades have passed since the previous Policy. During this period significant changes have taken place in our country, society, economy, and the world at large. It is in this context that the education sector needs to gear itself towards the demands of the 21st Century and the needs of the people and the country. Quality, innovation, and research will be the pillars on which India will become a knowledge superpower. Clearly, a National Education Policy is needed.

Now we have divided these reforms into 5 parts in which major changes are expected to be done.

The 10+2 system will be divided into 5+3+3+4  format. So as of now, we all are following the 10+2 system in which till 10th class we used to study the same subjects and then we chose particular subjects like Science, Commerce, and Arts. 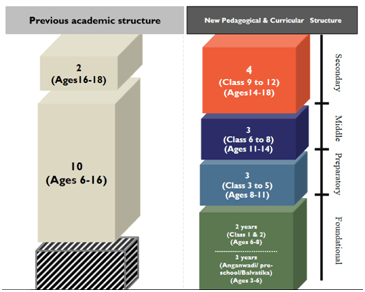 1st stage is Foundation Stage in which the initial 5 years will be divided into 3 years of pre-primary school and 2 years of classes 1 and 2. As of now, government schools give admission directly to 1st class, and kindergarten is done by private schools. So this will be removed and pre-primary schools will also come under government control. The 2nd stage is the Preparatory stage which will be of 3 years from classes 3 to 5.

NEP expands the age group from 6-14 years of mandatory schooling to 3-18 years of schooling.

The government has mentioned that high-quality Early Childhood Care and Education (ECCE) teachers in Anganwadi will be trained through systematic effort. Anganwadi teachers/workers with the qualification of 10+2 and above shall be given a 6-month certificate program in ECCE, and those with lower education will be given a one-year diploma program.

Board exams for Classes 10 and 2 will be continued, but they will be low stake. The focus will be on testing concepts and knowledge applications. Students will be given a second chance at boards to improve their scores. Students will be able to choose any of the subjects and the level in which they take Board exams.

There will be no hard separation among ‘curricular’, ‘extracurricular’, or ‘co-curricular’, among ‘arts’, ‘humanities’, and ‘sciences’, or between ‘vocational’ or ‘academic’ streams. This means we can study physics with political science, we can combine humanities with commercial subjects.

Co-curriculum and vocational subjects like sports, arts, commerce, science will be treated at the same level. Students can opt for courses as per their preference.

Reviews by peers and teachers will be included, which means other students in the class will also give their opinions and marks for each other. Skills such as analysis, critical thinking, and conceptual clarity will be taught in school and rote learning will come to an end.

The school curriculum overhaul will come in the shape of a new National Curriculum Framework for School Education (or NCFSE 2020-21), which will be undertaken by the National Council of Education Research and Training (NCERT).

NEP targets to achieve universal foundational literacy and numeracy in primary school by 2025. Pupil-teacher ratio (PTR) of under 30:1 will be ensured in each school. Increased focus on reading, writing, speaking, counting, arithmetic, and mathematical thinking.

To discuss what are the Gross Enrolment Ratio goals of the government for 2035 let’s discuss first what is it. Gross Enrolment Ratio is a statistical measure used in the education sector to determine the number of students enrolled in school at several different grade levels (like elementary, middle school and high school), and use it to show the ratio of the number of students who live in that country to those who qualify for the particular grade level.

National Education Policy 2020 puts focus on the mother tongue as the medium of instruction. The exact line used in the draft is “Wherever possible, the medium of instruction until at least Grade 5, but preferably till Grade 8 and beyond, will be the home language, mother tongue, local language or the regional language. Thereafter, the home or local language shall continue to be taught as a language wherever possible. This will be followed by both private and public schools.”

The ‘Three language formula‘ will continue but no language would be imposed on anyone. At least two of the three languages should be Indian. For example, if Punjab teaches in Punjabi and English, the 3rd language can’t be German or any other foreign language because in this case, English is already a foreign language. The NEP only recommends the mother tongue as a medium of instruction, and not make it compulsory. The decision is up to states to implement and the center can’t force them.

*Criticism of Primary Education in Mother Tongue. The first point is there will be unequal learning in Private and Govt Schools. Govt schools in every state will teach in their mother tongue like mostly North states will teach in Hindi, and southern states like Karnataka will teach in Kannada, Andhra Pradesh will teach in Telugu, etc. However, this scheme can’t be forced on private schools which teach in English mostly. So students studying in private schools will get the benefit as English is the dominant language of the Internet, Science, and Technology. What about children of people in transferable jobs?

After passing 12th class there will be a common entrance exam for admissions. The National Testing Agency (NTA) will conduct a common entrance examination (CEE) for admissions to universities across the country. A common aptitude test, as well as specialized common subject exams in the sciences, humanities, languages, arts, and vocational subjects, will be held at least twice every year.

Another point here is that professional courses like medical, legal, engineering, and IITs will have different exams as conducted now.

*Criticism – It will not be mandatory and will be left to individual universities and colleges to use NTA assessments for their admissions.

As of now all the coordination and maintenance of higher education study and degree comes under the University grants commission (UGC). But now, according to this new draft, UGC will be replaced by the Higher Education Commission of India(HECI). HECI will be set up as a single overarching umbrella body for entire higher education, excluding medical and legal education.

Moving towards a higher education system consisting of large, multidisciplinary universities and colleges. For example, IITs only teach engineering but now there should be a department of Humanities also. Phasing out of all the institutions offering single streams and that all universities and colleges must aim to become multidisciplinary by 2040.

At least there should be one University in or near every district. HEIs across India that offer a medium of instructions and programs in local/Indian languages. Establishment of a National Research Foundation to fund outstanding peer-reviewed research and to actively seed research in universities and colleges.

As of now Bcom, BA, BSc, etc are three-year graduate courses and Master is of 2 years. The Four Year Undergraduate Program (FYUP) is mentioned in the new Draft of NEP. Multiple Exit options are also added in the draft. For example, if we got admission to B.Com and now after completing one year, I want to switch to another degree or I don’t want to continue my B.Com so after completing one year I will get a Certificate. 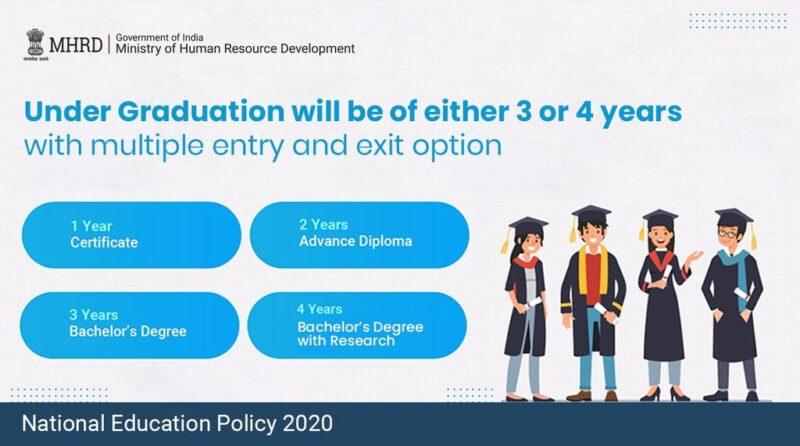 Masters of Philosophy (M. Phil) will be scrapped. As of now, a master’s student needs to complete MPhil first to gain a Ph.D. because MPhil is a middle research degree between a master’s and a Ph.D.

Foreign colleges will be permitted to open a campus in India. 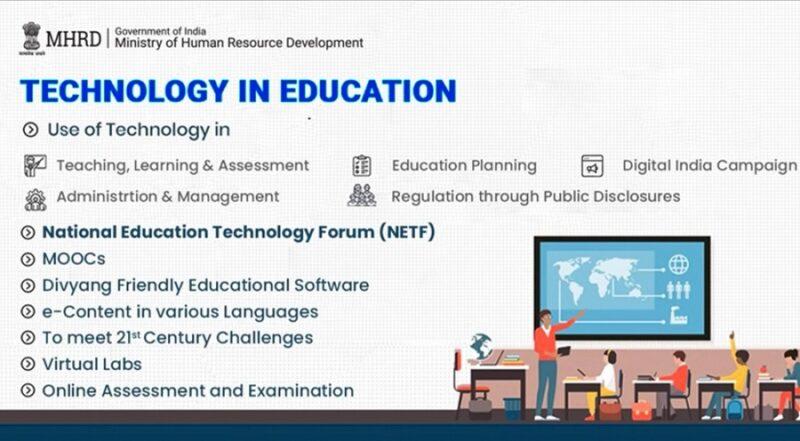 The national education policy must help re-establish teachers, at all levels, as the most respected and essential members of our society, because they truly shape our next generation of citizens. Teacher Eligibility Tests(TETs) will be strengthened to inculcate better test material, both in terms of content and pedagogy. TETs will be extended to cover teachers across all stages (Foundational, Preparatory, Middle, and Secondary) of school education.

*To gauge passion and motivation for teaching, a classroom demonstration or interview will become an integral part of teacher hiring at schools and school complexes.

By 2030, the minimum degree qualification for teaching will be a 4-year integrated B.Ed. Degree.

The current public (Government-Centre and State) expenditure on education in India has been around 4.43% of GDP. NEP target – 6% of GDP

The government has set a target of 2040 to implement the entire policy.

Do let us know what are your opinions on this draft of National Education Policy 2020.

13 Most Basic Docker Commands Every Developer Should Know

21 Most Common Git Commands Every Developer Should Know [Example Tutorial]